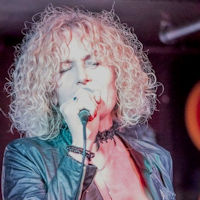 A very young Zoe’s musical journey started by being brought up at a convent boarding school singing sacred music in church several times a week.  A natural singer, Zoe was chosen as a regular soloist, and also often conducted the schola.  Zoe broadened her musical intake by defying school rules and listening to John Peel under the bed-cloths late at night on a tiny transistor radio (and loving bands like the Stranglers).   Zoe was introduced to Billie Holiday by her uncle Colin in her early teens, this was inadvertently the crucial stepping stone to Zoe’s natural home of singing the blues.  By the time Zoe left school she had achieved grade 8 piano, clarinet, music theory and singing (not to mention hours knocking around on an acoustic guitar when ever possible and dabbling in early song writing).  From here on the journey started ……

Zoe Schwarz: For somebody with such a natural feel for, and ability to convey emotion through singing the blues, had a very unorthodox start to her musical journey. Being brought up in a musical family, and with her mother being a very accomplished musician and pianist, Zoe’s first experiences were in the world of classical music.

A is graduate in the ‘Performing Arts’ from Trent Park, Middlesex University. She then performed in many guises over the following years, mostly in modern improvisational and classical music, drama and dance; including working with Keith Tippet, Scott Stromen, Harrison Birtwistle and Emma Kirkby. A cash-flow problem meant Zoë then started temping in part time work between singing jobs… a very common trend for budding musicians trying to bridge the financial gap of a fledgling musical career.

Zoë turned up the heat on her musical career in the autumn of 2001. Whilst on a course at Dartington Intl Summer School, Zoe impressed and was subsequently been invited by Keith and Julie Tippet to sing at a concert to sing some Billie Holiday numbers. Totally inspired she returned home in search of like-minded musicians; this is when she was introduced to Rob Koral…. this was the catalyst that Zoe needed, and after several years of working together, Zoe and Rob formed Zoe Schwarz Blue Commotion in January 2012.

As well as the well received Blue Commotion albums. Zoe and Rob also recorded a beautiful, intimate trio album called Slow Burn which, not only features Zoe’s distinct blues phrasing, but unashamedly is a vehicle for the influences that have impacted on Zoe’s entire musical development, including documenting the profound affect of Billie Holiday on her musical personality.