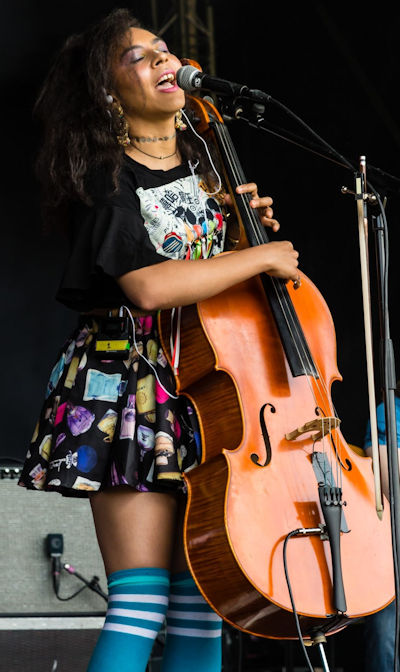 Satin Beige is an R&B cellist and singer songwriter. Her music has been described by Getintothis as “cello infused, lyrically soulful R ‘n’ B” with “ something of an Ed Sheeran and Alicia Keys lovechild vibe”.

Since graduating from Liverpool Institute for Performing Arts (LIPA) in 2015 she has been championed by UK Music and attends various Music Industry panels for UK Music and has received a special mention award at the UK Music awards (2017) presented by Kanya King (Mobos), supported Roachford on his UK tour, played four sold out nights at The Music Room (Philharmonic Hall) supporting Connie Lush, played at BBC Introducing Live in London, and performed with Tommy Scott from Space. She has enjoyed airplay on BBC Introducing Merseyside and her single “Being Me”- a song addressing attitudes towards race- has been played by BBC introducing Merseyside and BBC 6 Music (Tom Robinson show).

Satin has recently been in the studio with R&B artist Ray J (Love and Hip Hop Hollywood) and supported Chelcee Grimes (RCA) at her sold out hometown show in Liverpool. November 2018 saw the release of Satin’s single ‘Being Me’ which has been described as “an irresistibly arresting synthesis of R’n’B and pop that stays surprisingly expressive and vigorous from start to finish” in Pure Mzine.

Satin is currently recording her new EP scheduled for release in early 2020 and is currently rehearing with her new band ahead of UK festivals and tour dates in 2020.