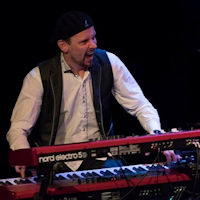 Nick Steed is a freelance keyboardist, vocalist based in Stockport, South Manchester performing all over the UK and Europe. Currently promoting his own band ‘The Nick Steed Five’ with a new original album being released, he is also a member of British Blues outfit ‘The Norman Beaker Band‘.
He is a highly regarded musician who has been recognised for his songwriting by international artistes from Lil John Roberts (Snarky Puppy), Francis Dunnery (It Bites), Mike Lindup (Level 42).

Nick Steed has built up a reputation as not only a real showman on stage but as a much in demand piano/organ player performing all over the UK and Europe….. His Current band ‘The Nick Steed Five’ features some of the best seasoned blues musicians currently on the circuit with, Steve Gibson (Drums), Kim Nishikawara (Sax), Peter Mason (Guitar), John Sandham (Bass) with a new album containing 12 tracks of original blues music covering all styles of blues from Chicago, Country, Americana, New Orleans, Blues Rock, Blues Funk also featuring well in demand players such as Norman Beaker & Larry Garner whom Nick also performs with regularly on European tours.