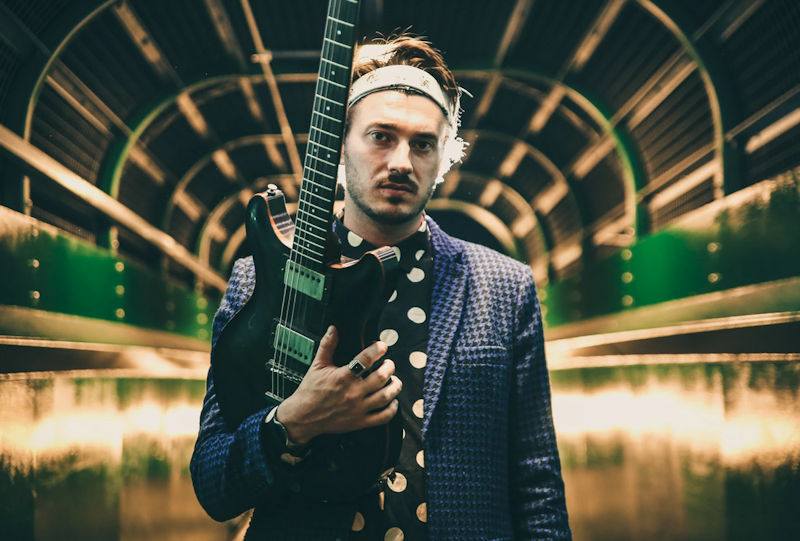 It was 1995, Krissy was 3 years old and his father invited him on stage to play along to Pretty Woman by Roy Orbison. This is when the story started for British Norwegian Krissy Matthews. Now at 28 years old, he has gained a reputation as being one of the most unique guitarists the 21st century has seen, and has gained a wealth of experience that only most musicians could dream of.

At 12 years old, Krissy was invited by John Mayall himself to perform 2 songs together, two nights running at Notodden Blues Festival, Norway. The opening act was Peter Green & Friends. A few years later, Krissy became the last person to perform live on stage together with the late great Mr Jeff Healey in the UK, shortly after receiving industry advice from the King of the Blues, Mr BB King. Not a bad beginning for someone so young!

Since then he has appeared on national Norwegian breakfast TV 3 times, recorded a live session for BBC Radio 2 Paul Jones Blues Show at Maida Vale Studios (London) and been featured on Nicky Horne’s Friday Night Rock Show for Vintage TV. He has recorded and released multiple records and paid his dues constantly performing and touring in clubs, festivals, schools and old people’s homes across the world!

In 2015, Krissy joined the iconic German outfit Hamburg Blues Band as a permanent featured member where he is still to this day backing legendary artists such as Chris Farlowe, Arthur Brown and Maggie Bell every night. Previous guitar players whom he replaced were Clem Clempson (Humble Pie / Colosseum) and Miller Anderson (Keef Hartley / Spencer Davis).

He has performed over 1000 concerts across UK, China, Russia and Europe. Iconic venues such as Museumsplatz (Bonn, DE), Tanzbrunnen (Cologne, DE), Freak Valley (Siegen, DE), Ronnie Scotts (London, UK), The Cavern (Liverpool, UK), Loreley Amthitheater (Loreley, DE), Zwarte Cross (Lichtenvoorde, NL), Festa Avante (Lisbon, PO) and headlining one of Germany’s most famous festivals Burg Herzberg in 2018 to 20,000 people together with The Herzburg Blues All Stars are just some of the highlights.

In March 2019, he was invited to grace the stage with his trio at the very well known “Rockpalast Festival” for national German TV company WDR. An accolade and a dream for any musician!  This is planned to be released as a live CD/DVD package in Spring 2022 via MIG Music.  It has been delayed due to the effects of the Covid19 pandemic.

In March 2019, Krissy released his last studio album “Monster in Me” via MIG Music. This was produced by Baard Torstensen from Clawfinger and co-written with Baard and Pete Brown. The man once known as “the unofficial fourth member of Cream”.  Pete is the poet behind timeless songs such as Sunshine of Your Love, White Room & Politician. ​

A brand new Krissy Matthews studio record was finished during the pandemic in October 2020 and Krissy signed a great new deal with the legendary German label Ruf Records. This includes 9 songs all written during and about the world Lockdown, and how this personally affected him. This is planned for release on August 27 2021 via Ruf Records, followed by endless touring duties between Hamburg Blues Band and his own solo career.