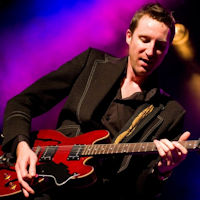 By the time this Carlisle festival comes round Jon will have put a band together to take his brilliant new album ‘Colour In The Sky’ onto the bigger stage, a natural progression from his highly successful solo tour, earlier in the year. Over time Jon has been heavily involved in many different line-ups (The Hoax, Amor, The Jon Amor Blues Group, The Boom Band, Fisk and Amor). For 2019 he is putting together a very special band for a series of gigs built around the Carlisle Blues Rock Festival – we don’t yet know the personnel but with Jon at the helm it will be magical.