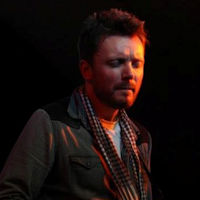 A songwriter genuinely literate, sometimes almost literary, Ian is an original craftsman. Expressed through a distinctive bitter-sweet vocal delivery, Ian’s songs hold nothing back. His ability and willingness to share with his audience, naked honesty and genuine emotion, is what sets him apart.

Ian’s career took off in the summer of 2003, when he signed to Ruf Records following a personal introduction to US record producer, David Z (Prince – Purple Rain). His debut album ‘INSIDE’ (Ruf1094) was released in October of that year.

Further albums, live DVDs and extensive tours of Europe and the USA followed, with Parker always seeking new musical avenues to explore, never content to merely rehash old ideas, no matter how successful they may have been. To this end, Ian is something of journeyman, guided by his art and his self-confessed emotional need to express his soul through music.

His journey has taken unexpected turns, testing his loyal following from time to time, but the integrity of his writing, the quality of his distinctive voice and the soulful nature of his signature guitar playing have always been the bedrock of his work.
Following the release of Politik Blues (Eye-Pea002) in April 2015, Ian refocused his attention on the Stratocaster-driven blues music he began building his reputation on, more than twenty years ago.

Joined onstage by David Jenkins (bass), Chris Finn (drums) and his long-time collaborator Morg Morgan (keys), Parker is entering a new and exciting phase of his remarkable career. Freed from the shackles of being the new kid on the block vying for attention in an over-saturated market, Parker approaches his music, these days, with the calm, self-assurance which accompanies one who has, to some extent, been there and done it. Nothing to prove and still so much to say, Ian Parker remains an act not to be missed.