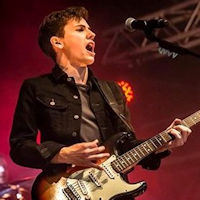 Well… where do I start ?

As far as I can remember I always loved music. Since I was born, both of my parents raised me and my brother with music (as they did with my sister later). None of them are musicians, but music has always been a part of our childhood, between my father playing his cd and his old vinyl player, and my mother, listening to the radio from the first morning lights. We’ve always had a house full of instruments, even if no one was really playing them. I always loved the guitar, and even now I couldn’t tell you why. Back then, I had a guitar without strings but I had all the fun in the world to ”play” it.

My first real encounter with music was in France, Brittany, where I grew up, and where my parents are from. They saw I had quite an interest in music, so my father brought me into a music shop. I was five years old.

My father spoke for a while with the owner, who told him he was a guitar teacher as well. He knew I was very keen on guitars, so for a few weeks, we took lessons together with this teacher.

Sadly (or not) I didn’t keep it up, and in my mind as a five years old child, I was finding much more interesting things to do.

And the years passed by… till I turned 15. It is still a blur to me why, suddenly, at 15, I asked my parents to buy me a guitar for Christmas.

So this is where, I guess, it really began. At this time, me and my family moved again in Switzerland, where I have lived now for more than 10 years.

This is where I spent countless hours playing music. For a couple of years, I traveled through Switzerland (and sometimes France), playing in jam sessions, sharing the stage with friends, and so on, making my first steps on the stage.

And of course, as I was living in Switzerland at that time, I discovered the Montreux Jazz Festival…the first time I went there was in 2013.

I spent hours and hours playing at the Montreux Jazz Club during the jam sessions, for more than four years. I had as well many time the chances to open those long nights with a show at the beginning and then hitting the stages with many incredible musicians: Avishaï Cohen, Matthieu Chedid (our French star), the band of Lady Gaga & Tony Bennett, musicians playing with Santana, Tedeschi Trucks Band and many others…

Among all those wonderful meetings, one has been particularly memorable: during a night of the summer 2014, I met Quincy Jones. When he was in Montreux for the festival, he used to spend a part of his nights at the Jazz Club. One night, when I was opening on the stage, he was sitting in the audience listening carefully to the music… and I didn’t even notice him!

So after we just played the set, one of his crew members came to me and said: “Quincy Jones wants to see you “. So he brought me to the corner where they were all sitting, just next to the stage and I met him.  We talked together for a moment, I couldn’t say how long this lasted, a half hour, maybe more ? He started the conversation with words that I’ll never forget: “I like the way you play”. From there, we spoke about music (of course), the festival, Montreux. He asked me about my influences, who I was listening to. He also told me a bit of his story of the city, and all the amazing shows and artists he saw here in past years.

What a night. Of every moment I lived so far in the music, this has probably been the most important, valuable and lasting one for me. And I think I still don’t realize now how lucky I was to meet such an icon.

From then, and my first gig under my name in 2015, I’ve been playing everywhere I can: Switzerland, France, Germany and finally, England.

In 2016, I came to London to play my first shows in England. One in Shoreditch and one in Camden at the Spiritual Bar, a lovely small venue, where I’m still trying to play every time I pass through the capital.

For a year, I played in London as much as I could and finally, after one year of “gigging” around the city, I got the chance to open a night at the legendary 100 Club on Oxford Street. This has lead to more and more gigs in England, my first festivals this summer… and now my first big tour in the UK, opening as special guest on Wishbone Ash XLIX UK Tour.

This was a very exciting moment for me. As most of the bands I have listened to come from England and USA, it is thrilling to play in front of audiences who have grown up with some of these bands and who were influenced by the musical culture of the country itself. And after the reactions of the crowds so far, I just can’t wait to play there again and to hit the road with Wishbone Ash.

This tour is the next big thing for me. After that, for the future, the plan is simple: an album recording. For a long time I was hesitant to do it, as I really wanted to wait the right time for it. But time has passed, songs have been written, and I’m now just realizing how much I need to get in the studio and to record those songs that have kept me company on the road and on the stages for the last three years.

After that, we’ll be heading to the rest of Europe, got to get my name out !

Here’s a part of my story, I look forward to more and more shows and to see you on the road.