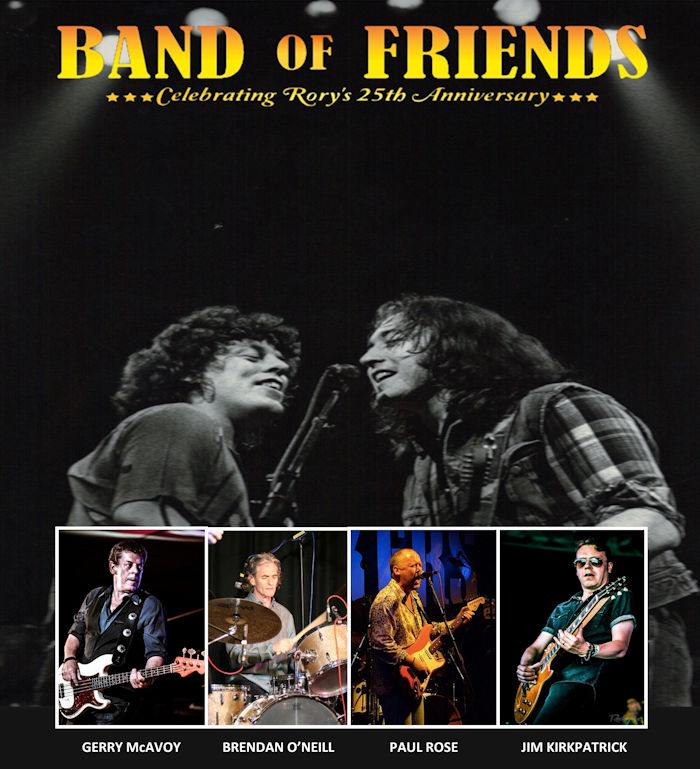 When Rory Gallagher, the Irish guitarist – vocalist passed away aged 47 in 1985 he left behind an eleven – album catalogue of inspired music, and the memory of unforgettably energetic concerts captured on three live albums. Several years after Rory passed his bass player Gerry McAvoy, who appeared on every one of those albums, decided he wanted to take those songs and play them live. He realised what a great composer Rory was and what great catalogue of songs he’d left behind, he wanted the memory to live on but to do that he needed the right musicians. Ted McKenna (Rory Gallagher/Sensational Alex Harvey band/Michael Schencker group/Gary Moore/Greg Lake) came on board, as did Marcel Scherpenzeel (Guitar & vocals). It was to become an 8 year journey until, sadly, in January 2019 we lost Ted. Marcel went on to form his own band soon after.

So here they are in 2020 with a new Band of Friends line up, and a fresh approach. The band will be touring extensively worldwide throughout 2020, celebrating Rory’s 25th anniversary. Gerry will be joined once again by Brendan O’Neill on drums. Brendan played with Rory and Gerry for 10 years from 1981 – 1991, touring extensively throughout USA, Japan, Australia and Europe whilst also recording “Jinx”, “Defender” and “Fresh evidence”, Rory’s last three studio albums. Jim Kirkpatrick and Paul Rose will have the mighty task of filling Rory’s shoes.

Paul Rose is a guitar player’s guitar player, he has played with some of the top names in the business. As a youngster he was picked, by Rory, from 1000 young guitarists to win the Fender sponsored best guitarist competition. “A very hot player” – Rory Gallagher.

Jim Kirkpatrick grew up listening to Rory Gallagher. He dovetails well the other new Band of Friends guitarist, Paul Rose to bring the energy and style that Rory used to produce on stage. Jim is better known as lead guitarist with the popular rock band FM. He also plays in Bernie Marsden’s band, Rhino’s Revenge and The Chris Bevington Org, as well as fronting his own band.

“In the era of tribute acts who deliver note – perfect renditions of their heroes’ catalogues, the Band of friends is something different. They can do the notes played by electric blues icon Rory Gallagher. But they also do the sound, energy and feel – because the band includes people who helped define those essential elements” – Music Today USA