“A joy from start to finish as the legendary Mike Vernon lets his hair down in the company of five sensational musicians. There’s so much fire in Mike Vernon’s belly this show should come with a fire hazard warning. The audience was jumping for joy as a British blues legend let the good times roll with his all mighty combo.”
–  Stephen Foster, New Wolsey Theatre gig 24/02/2017.

Answer: All have, at one time or another, been involved in the making of records that have been produced by Mike Vernon

Mike Vernon is probably best known as the founder of Britain’s #1 blues record label, Blue Horizon. During the four year period that Blue Horizon was distributed by CBS and Polydor, the label issued around 60 singles and more than 100 albums – most of them featuring blues artists. Although Mike Vernon is primarily associated with the blues, he also produced significant acts outside of that field during those early years – David Bowie; Dutch rock band Focus and a five-piece soul group from California, Bloodstone. His first single production for Bloodstone – ‘Natural High’ – hit the #1 spot on the US charts earning the Producer a Gold record. But there were other such Awards already on the wall – Bowie’s ‘Laughing Gnome’; Fleetwood Mac’s ‘Albatross’ and a number from his work with Focus. In future decades, whilst continuing his crusade to record blues acts Mike Vernon worked with Level 42 and, in so doing, collected two further Silver discs. He also produced Andrew Roachford’s debut album – another Gold platter. Mike worked both as a Producer and Engineer throughout the 1980s and early 1990s with some further significant successes – especially in Europe. Albums by Spanish bands Danza Invisible and Los Secretos saw major chart success as did a Renaud Hansen release in France. During the late 1990s Mike Vernon launched three new blues orientated labels – Indigo, Code Blue and Blueside. With Code Blue he produced Sherman Robertson, Jay Owens, Eric Bibb, John Primer and Bo Diddley (his album was nominated for a Grammy) whilst Eugene Bridges and Angela Brown were to appear on Blueside. In 2000 Mike retired and moved to Spain. But in 2010 Mike Vernon came out of retirement to produce both Dani Wilde and Oli Brown for Ruf Records and a ‘live’ set with Louisiana legend, Lazy Lester. His most recent projects have seen him orking on a debut CD with an exciting new Spanish band from Sevilla – Q & The Moonstones as well as producing chart topping Laurence Jones and Sari Schorr & The Engine Room CDs.

And so to Mike Vernon – the Rhythm & Blues singer! Let the man speak for himself: “I have always loved singing – I was in the local Church Choir when a teenager and then as a vocalist with The Mojo Men – an early blues band of doubtful talent! Then I took two opportunities during the Blue Horizon years to have a go at making solo outings – with mixed success I would have to say. Then came The Olympic Runners – I produced, wrote and performed alongside George Chandler, Pete Wingfield and Joe Jammer. Then in the late 1970s and early 1980s I took on the task of singing the baritone parts with Rocky Sharpe & The Replays. I really miss the ‘buzz’ of working in front of an audience – so here I am, a born again Rhythm & Blues vocalist. I’ve been doing a lot of gigs in Spain and getting tremendous reaction – I’m heading into the studio soon to cut a ‘homage to the R&B Greats of the ‘40s/’50s’ CD and I am ready to rock’n’roll! Now is the time – and if I don’t do it now – it will not get done at all!” 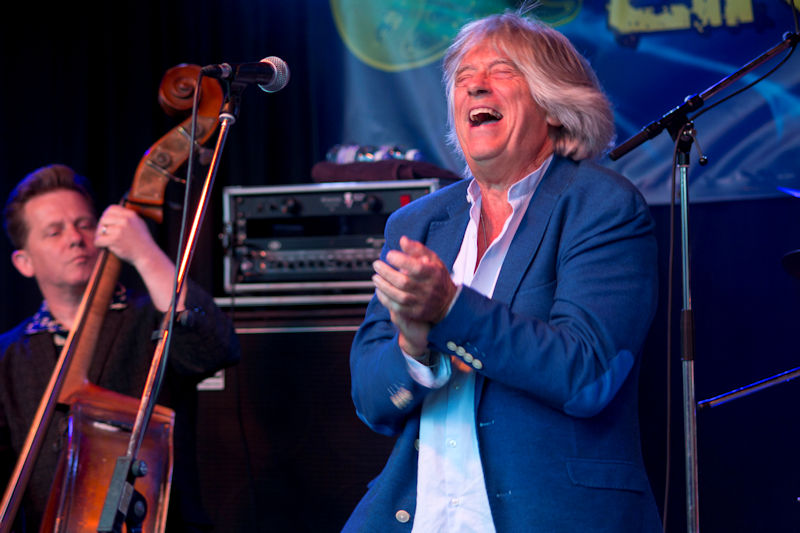