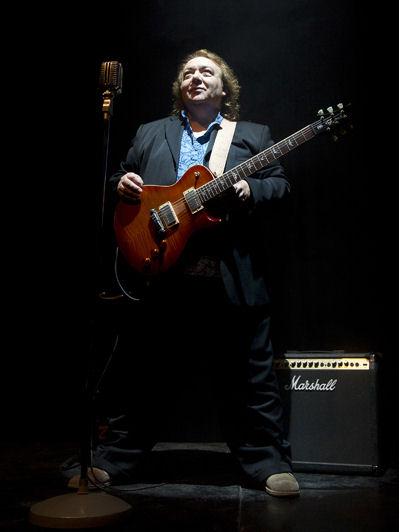 Bernie Marsden is primarily known for his work with Whitesnake having written or co-written with David Coverdale many of the group’s hit songs, such as “Here I Go Again”.

Having played with Glenn Cornick’s Wild Turkey in 1974, he then played with Babe Ruth, from 1975–76, before becoming an original member of Paice Ashton Lord in 1977 and then joining the hard rock band, Whitesnake, after having the possibility of playing with his boy-time hero Paul McCartney and Wings because while waiting, David Coverdale asked him to form Whitesnake.

In more recent years, Marsden has toured with his bands Company of Snakes, M3 (both formed with fellow former Whitesnake members Micky Moody and Neil Murray), and performed with Elkie Brooks.

Over the years he has taken part in a number of sessions and has released a handful of solo albums (And About Time, Too!, Look at Me Now, Green & Blues, Stacks). He has also collaborated with Micky Moody on a number of Marsden-Moody live and studio projects.

In the last ten years, Marsden has been involved in very different projects. The most unusual being two engagements at the National Theatre in London for Nickolas Hytner’s productions of Shakespeare’s “The Winter’s Tale” and “Henry the V” in collaboration with Simon Webb. Also, he appeared in ZDF television in Germany for their production of “Frankie”, a six-part TV special. After this, Marsden has worked alongside Robert Plant, Paul Weller, Ian Paice and Jon Lord for The Sunflower Jam charity concert in London. Bernie also played Guitar with Ringo Starr and his son Zak Starkey in Monte Carlo. Most recently, he has been playing and writing for guitar virtuoso Joe Bonamassa.

Bernie Marsden now endorses PRS Guitars and has his own Signature guitar released in 2012. As of the beginning of 2013, he started recording his new album, Shine, for Mascot Provogue records at Abbey Road Studios in London and Royal Studios in Memphis. The album, released in 2014, features guest appearances from David Coverdale and Joe Bonamassa. He has also produced a blues documentary, A Day in the Delta, in collaboration with Jim Singleton, filmed in Mississippi.

In early 2017 Bernie released his autobiography, Where’s My Guitar – on the Tourbus with the Snakeman to great acclaim from fans. A labour of love, the book covers Bernie’s musical journey with humour and honesty and features a number of private, unseen pictures from his career.