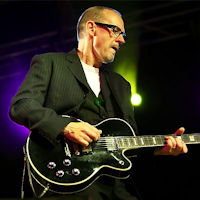 When Andy Fairweather Low released ‘Sweet Soulful Music’ on Monday 14th August 2006 it was his first solo album in 26 years. Yet this is no simple ‘comeback’ story – those intervening years have been packed with people and projects virtually amounting to a stellar A to Z of Popular Music.

Quite simply, Andy Fairweather Low has been – and continues to be – the guitarist and vocalist of choice for a phenomenal cast list of musical luminaries.

Cardiff-born Fairweather Low originally came to fame as vocalist and leader of the pop group Amen Corner. The band had four Top 30 hits – a sequence starting with ‘Gin House Blues’ in 1967 – on Decca’s subsidiary Deram label before leaving at the end of 1968 to join Andrew Loog Oldham’s pioneering indie label, Immediate. Amen Corner were instantly rewarded with a UK number one, ‘(If Paradise Is) Half As Nice’ in early 1969 but, despite another Top Five hit with Roy Wood’s ‘Hello Susie’, it seemed the band could not survive success.

By the following year Amen Corner had split, with Andy Fairweather Low escaping the teenybop grind by forming the simply named Fairweather, a band signed to RCA’s shiny new progressive label, Neon. Fairweather reached number six in the UK singles chart with ‘Natural Sinner’ during the summer of 1970.

It was to be, however, the band’s only hit. One album later and Fairweather came to an end. Andy Fairweather Low then became somewhat of a refugee from the music business, eventually emerging three years later as a solo artist with an album called ‘Spider Jiving’ on A&M.

The album was produced by Elliot Mazer – best known for his work with Neil Young – and featured some heavyweight backup support from the likes of the Memphis Horns and Nashville legend Charlie McCoy on harmonica. ‘Spider Jiving’ included the wah-wah driven ‘Reggae Tune’, a UK Top 10 hit in September 1974.

Andy Fairweather Low was on something of a roll. The following year, 1975, he released his second solo album, ‘La Booga Rooga’, which eventually emerged as his most successful record. Produced by the celebrated Glyn Johns – at that time fresh from working with The Eagles – ‘La Booga Rooga’ featured such stellar musicians as ex-Eagle Bernie Leadon (guitar), Dave Mattacks (drums), Eddie ‘Tan Tan’ Thornton (trumpet), Kenney Jones (drums), John ‘Rabbit’ Bundrick (keyboards), BJ Cole (steel guitar) and Georgie Fame (keyboards). Among the tracks was ‘Wide Eyed and Legless’, a Top 10 hit for Fairweather Low at the end of 1975.

Johns was also at the helm for ‘Be Bop ‘n’ Holla’, Fairweather Low’s 1976 album. It was followed, in 1980, by ‘Mega-Shebang’, recorded for Warner Brothers and destined to be Fairweather Low’s final solo album until 2006. In between ‘Be Bop ‘n’ Holla’ and ‘Mega-Shebang’, however, Fairweather Low sang backing vocals on The Who’s 1978  ‘Who Are You’ album – the start of a relationship which also saw him playing guitar on the band’s 1982 album, ‘It’s Hard’, and appearing with Pete Townshend on his 1993 ‘Psychoderelict’ tour.

That work with The Who set the direction for Fairweather Low’s next moves. He became the ultimate Guitarist to the Stars, building an extraordinary reputation that has endured to this day.

Most notably, Fairweather Low has been a stalwart of Eric Clapton’s band since the early-Nineties, touring in Clapton’s bands right up until 2003 and recording the ‘Unplugged’, ‘From the Cradle’, ‘Pilgrim’, ‘Riding with the King’, ‘Reptile’, ‘One More Car One More Rider’, ‘Me & Mr. Johnson’ and ‘Back Home’ albums with him. Andy was, once again, asked to be part of Eric Clapton’s UK tour in May 2009 and was happy to do so.

Andy Fairweather Low was also a regular player with George Harrison, appearing on his ‘Live in Japan’ album and, in 2002, playing several of the lead guitar parts for the Harrison tribute, ‘The Concert for George’.

One of Fairweather Low’s longest musical relationships, however, has been with Roger Waters. The two have worked together since Waters’ ‘Pros and Cons of Hitchhiking’ tour of America in 1985. Since that time Fairweather Low has contributed to two of Waters’ albums – ‘Radio K.A.O.S’ in 1987 and ‘Amused to Death’ in 1992 – and played guitar and bass on the 1999-2002 ‘In the Flesh’ world tour. Fairweather Low rejoined Waters for the ‘Dark Side of the Moon’ tour in 2018.

Fairweather Low was also a regular member of Bill Wyman’s Rhythm Kings, the consequence of another relationship that stretches back to the mid-Eighties. Fairweather Low and Wyman first worked together at the Small Faces’ legendary bass player Ronnie Lane’s A.R.M.S. – Action for Research into Multiple Sclerosis – benefit concert at London’s Royal Albert Hall in 1983. It was a charity cause that Wyman revisited in 1985 with Willie & The Poor Boys, a Fifties’ style rock ‘n’ roll concept band featuring Fairweather Low. Since that time Fairweather Low has been frequently involved in Wyman’s projects touring with the Rhythm Kings in 2005 and the summer of 2006.

But perhaps it was inevitable that one day Fairweather Low would be tempted to return to the studio in his own right. That time came in 2006.

Twenty-six years was a long wait but ‘Sweet Soulful Music’ signaled a welcome return to Solo work for one of the UK’s most distinctive artists, as heartily endorsed by many of the world’s greatest talents.

October  2007 saw Andy touring solo again in the UK with his own all star band containing  Chris Stainton – Keyboards, Dave Bronze – Bass and Paul Beavis – Drums.  One of the shows was filmed and the resulting DVD is released in June 2008 closely following the TV advertised release of his new album – The Very Best Of Andy Fairweather Low – The Low Rider.

Further tours in 2008 & 2009 cemented Andy’s position in the UK as a live touring band and he won many new friends whilst opening shows with the band for Robert Cray, Dennis Locorriere & latterly Eric Clapton on their UK tours.

The permanent line up of his band The Low Riders is Paul Beavis – Drums, Dave Bronze – Bass & Vocals & Nick Pentelow  –  Sax and Clarinet.

Andy & The Lowriders opened the shows on the 2011 UK Eric Clapton UK Tour and a live CD called ‘Lively‘ was released later that year.  They were in the studio again in 2012 and ‘Zone O Tone‘, their new CD, was released that Summer on Proper Records.

2013 saw Andy & The band opening the shows on Eric’s European tour headline The Americana Festival and complete their first tour in Japan with 8 shows in Tokyo.

Their UK Autumn 2013 tour in support of the Zone O Tone was so well received that further early Spring dates in 2014 were added in the UK and Germany  and 2014 itself started with the band on Bob Harris’ rock show playing in session and when the band came back from Germany where they had built upon previous tours they appeared for two nights as guests in an all star cast celebrating Albert Lee’s 70th birthday at The Cadogan Hall, London where they were also enlisted as the house band for a number of household names.

Their UK Spring touring cemented in a growing UK fanbase too and then Andy and Dave Bronze picked up touring again as members of Eric Clapton’s band and for good measure Andy himself took part, playing guitar, in a special all star re-recording for Radio 2 of Rock Around The Clock for a series celebrating the Birth Of Rock & Roll which was broadcast in May that year.

In May 2015 they were included as opening act for Eric’s 70th birthday shows and so played two shows at Madison Square Garden and seven shows at The Royal Albert Hall.

A riotous sold out show at The New Theatre in Andy’s home town Cardiff was filmed on their Autumn 2014 tour and a Box Set DVD / Double Live CD was released in August 2015.

In Autumn 2018 Andy decided to take the big band on the road for a complete tour, it was both a massive gamble and a great success with very strong sales figures across the board over 41 dates.

Andy now tours with two line-ups, the four piece and the seven-piece big band and further profile projects are currently in planning………….